After studying engineering during five years, Raoul Barbet specialized himself in project management and production pipeline, particularly in cultural and audiovisual fields. He worked from 2004 to 2006 for festivals in Canada and France and as technical coordinator in 2007 during one year for the Bophana Audiovisual Resources Center in Phnom Penh, Cambodia.
His first videogame work was in 2008 for Quantic Dream’s Heavy Rain, working two years on motion capture and scenes game design.
He joined then Illumination Mac Guff animation studio in 2010 (Despicable Me series) as a layout artist for the animated feature film The Lorax.

Back to videogame industry with DONTNOD Entertainment in 2011, he’s worked on the cinematic and narrative elements of the game Remember Me.
The last three years, Raoul worked on Life is Strange, an episodic modern adventure game, published by Square Enix, as the co game director.

The fifth and last episode is out and he’s now working on new projects in game and film industry. 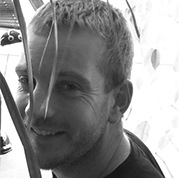